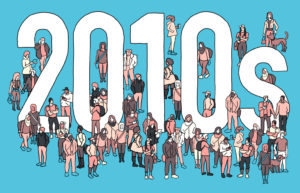 The start of a new decade is always a good time to look back and reflect on what has gone before. From an investment perspective, a decade is also an excellent timeframe to review long term performance of growth assets like shares and property, as it covers a full economic cycle (generally considered to be about 8 years).

The 2020’s was an outstanding decade to be invested in New Zealand equities. The benchmark MSCI New Zealand Index averaged annual gains of 12.8%, while avoiding any scary collapses like what was seen in the previous decade with the global financial crisis in 2008. The worst year was a -5.4% decline in 2015, and the best was 2019 with a 38.8% gain.

While doing some research for this blog post, I came across the following colour coded chart of annual share market returns – highest to lowest – for developed market countries outside of the US, which goes back 15 years (New Zealand is teal coloured): 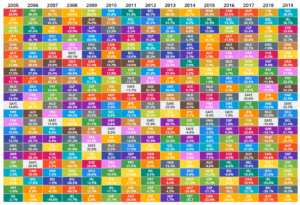 There are a few things worth highlighting:

Overall, the 2010’s were a tremendous decade to be invested in equities, and not just in New Zealand. For most of the decade the bulls were in charge, producing stellar long term returns. Bears were rarely sighted, and when they did claw back gains, they didn’t drag markets down too far.